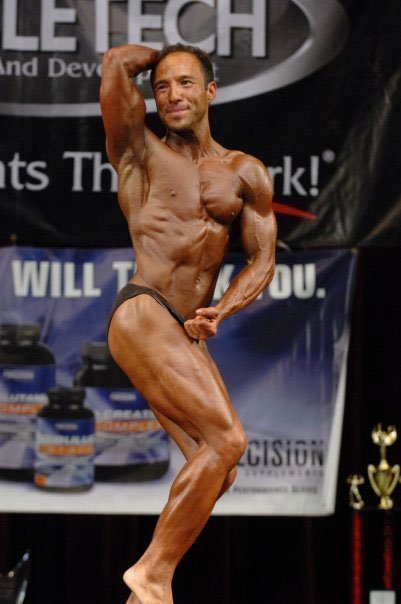 “My name is Jim Ribau, this is my bodybuilding story.

I am an average size guy, usually weighing in and around the 155-165 pound range who loves to work out.

Dating back to grade 12 in 1991, I have worked out lifting weights for over 20 years for many reasons including staying healthy, being fit, and of course, looking good :o) .

This belief, coupled with society’s scary track record for obesity, heart attacks, cancers, and other diseases, keeps me “motivated” to continue working out regularly, usually 4-6 times/week.

Working out is a passion of mine.  It is a lifestyle.  It is social.  It is great for many reasons.

When I work out, I feel confident.  I feel focused.  I feel centered.  And most of all, I feel healthy, energized, and alive!

Seeing that I’m not a “big guy”, you may be asking yourself “how did Jim get into bodybuilding?”

Well, back in 2003, I watched my weight training partner and friend of five years, dramatically transform his physique over a 12 week period to compete in the 2003 OPA (Ontario Physique Association) Ontario Bodybuilding Championship.  He won his Welter Weight class (154-165 pounds) at the competition.  His changes were phenomenal.  I was intrigued!

After that competition, he said to me I had what it took to compete also because I trained hard and because I had the muscular foundation to do so.  He had more belief in me than I did in myself, that is for certain!  I didn’t think so, however, I was curious and asked him what was involved if I wanted to compete.

He responded, “You are on a need to know basis, and right now, you don’t need to know.  You have to decide whether you want to compete or not, and then we’ll take it from there!”.

After some “hmmm-ing” and “haaa-ing”, I decided I wanted to compete.

I quickly realized I knew very little about what it took to compete.

In due time, the following are just some of the things I learned I had to do in order to compete:

Needless to say, the tasks were daunting, and yet, it was very satisfying to me knowing I was about to do something that was going to challenge me physically and mentally like nothing else I’d ever done before!

Knowing that I didn’t know what to do, my training partner helped me get ready for my first competition.  He was my mentor because he had competed several times in the past 15 years and he had been successful at it.

Twelve weeks and 28 less pounds of fat later, I took 2nd place in a group of six in my first bodybuilding competition, the 2003 Level 1 (Local) London Ontario Bodybuilding Championship, on November 3, 2003.  I was thrilled and hooked!

In 2005, two years later and after forgetting the amount of work and dedication that was involved in the 2003 competition, I decided to compete again, this time at the Level 2 (Regional) Northern Ontario Sudbury Bodybuilding Championship, on June 11, 2005.  I won 1st Place in a group of three and now was feeling even more thrilled and excited to be a part of the bodybuilding culture than ever!

Now that I had won 1st place at the Level 2 show, I qualified to compete at the Level 3 Provincial Ontario Bodybuilding Championship the following weekend!

From Saturday, June 11, 2005 morning of the 2005 Northern Ontario Sudbury Bodybuilding Championship to Sunday, June 12, 2005, the day after competition, I put on 11 pounds of mostly water and several burgers, fries, and cheesecake!

In order to compete the following Saturday, June 18, 2005 at the 2005 Level 3 (Provincial) Ontario Bodybuilding Championship, I had to lose those 11 pounds again!

I won 2nd place in this competition in a group of three competitors.  Now, I was both very excited and had the desire to work even harder to win 1st Place the next time!

Just like in 2005, two years later and after forgetting the amount of work and dedication that was involved in the 2005 competitions, I decided to compete again.  This time repeating the Level 3 (Provincial) Ontario Bodybuilding Championship, on June 23, 2007.

I lost 32 pounds of fat for this competition and was 13 pounds heavier in muscle then I was in 2003!

I won 1st place out of two competitors at this competition!  I will never forget the feeling anchored in my mind and body walking off the stage having won.  This is a feeling that I have used to propel me to move forward in many other situations and experiences in my life.

Winning the Bantam Weight Class of the 2007 Ontario Provincial Bodybuilding Competition qualified me to compete at the National Canadian Level!  Not bad for a little guy :o) ! 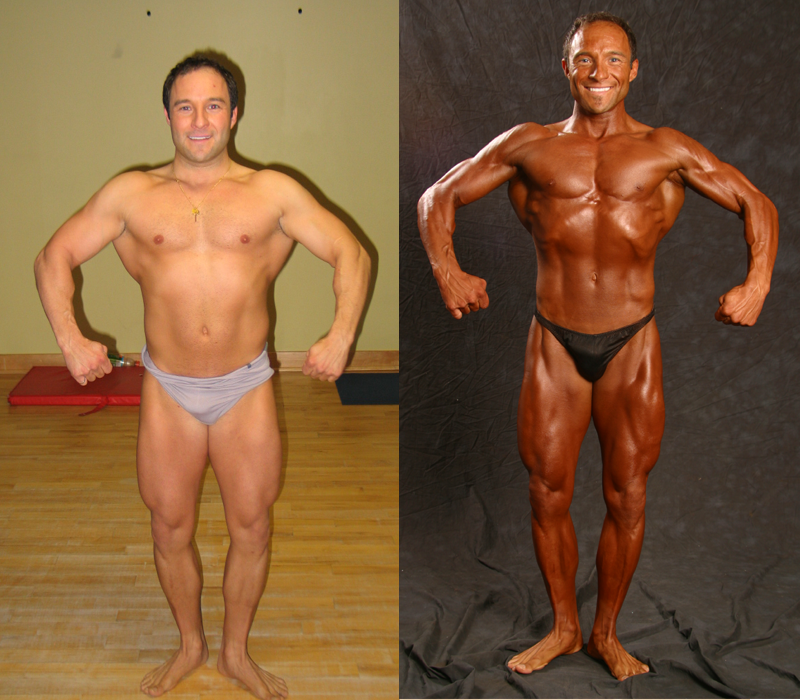 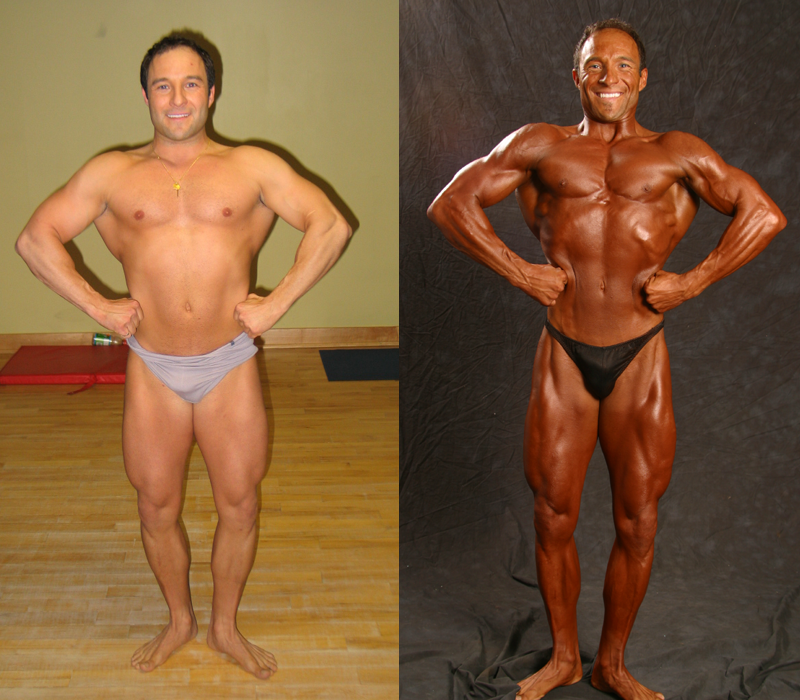 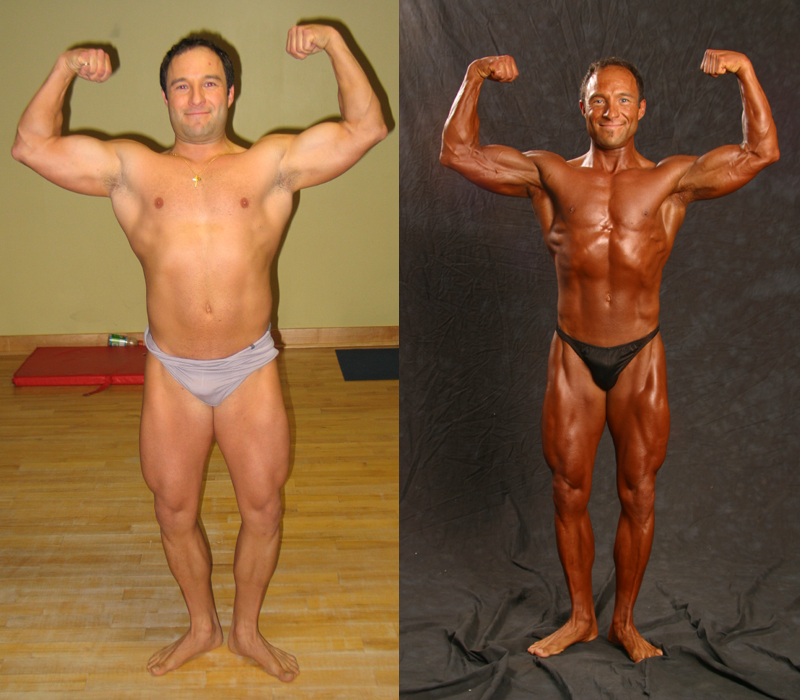 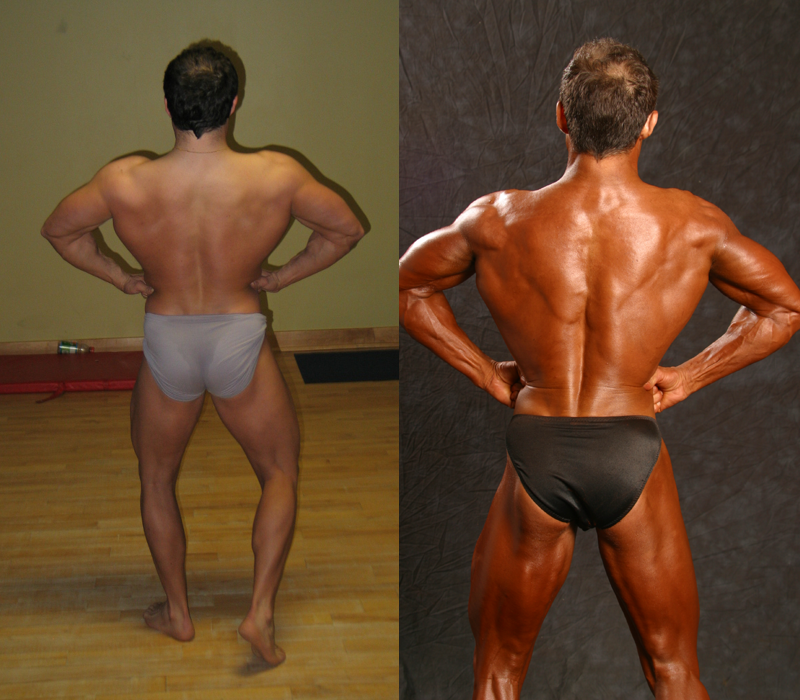 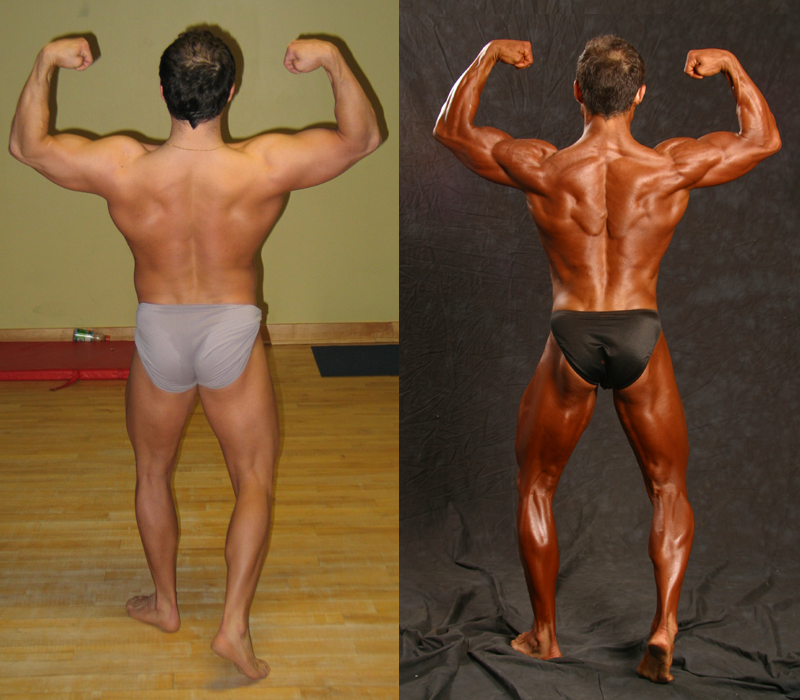 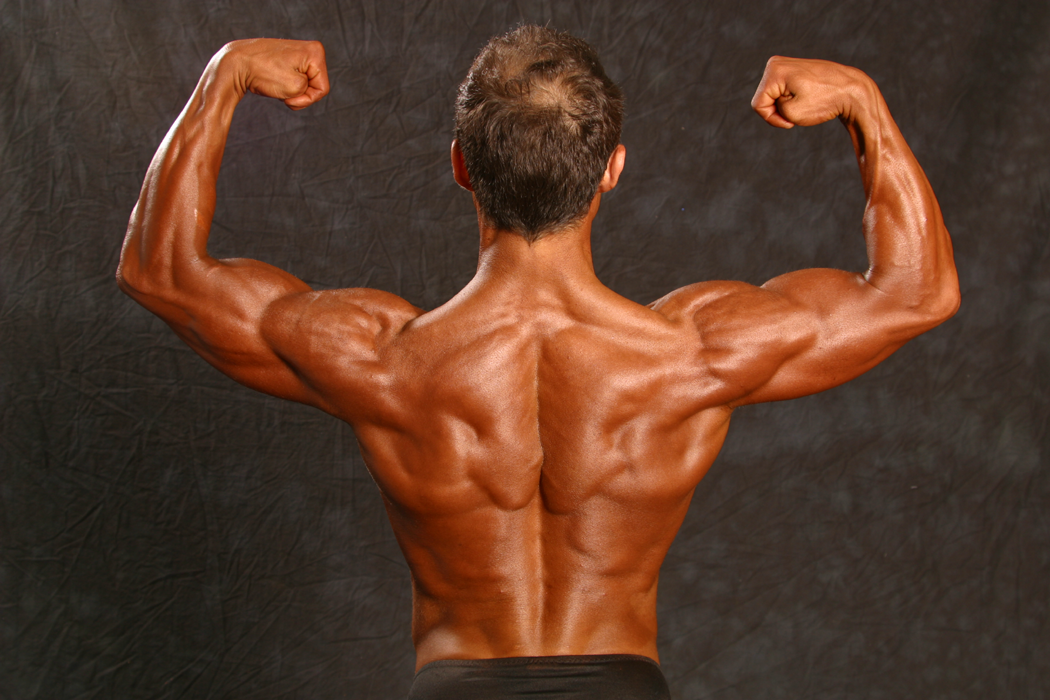 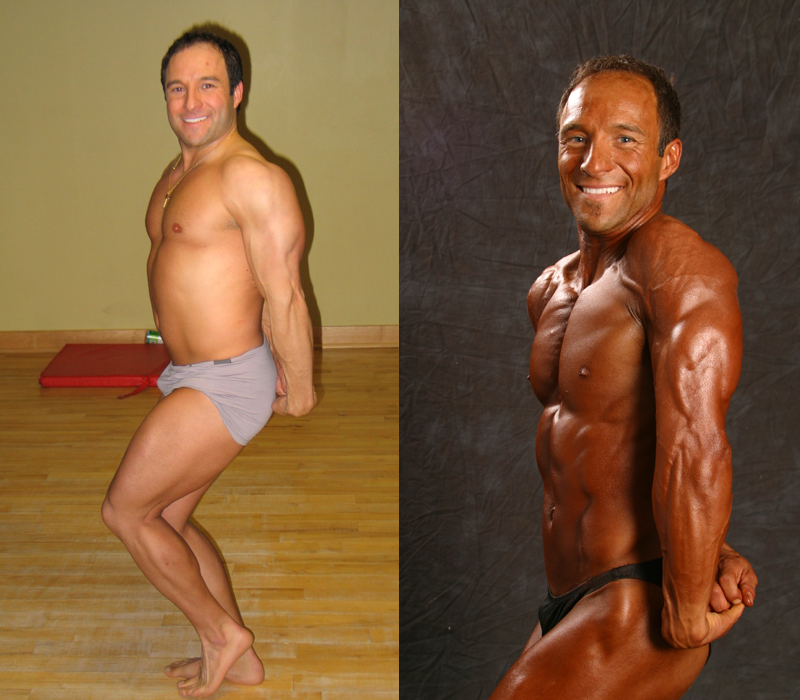 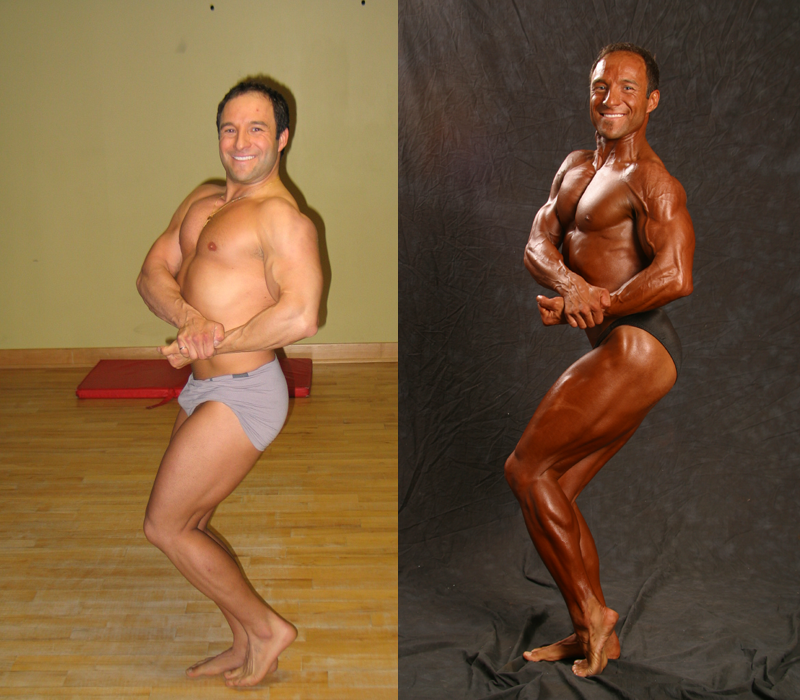 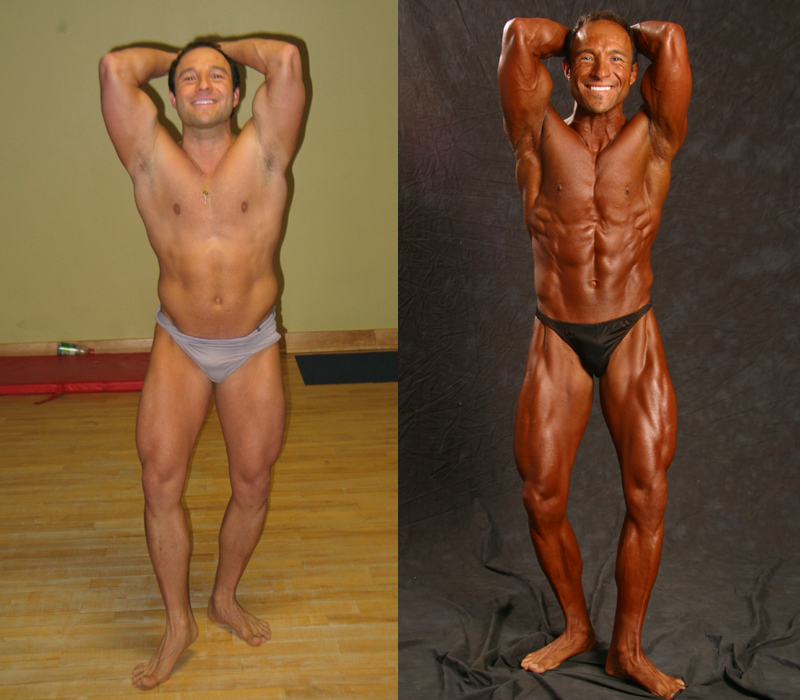 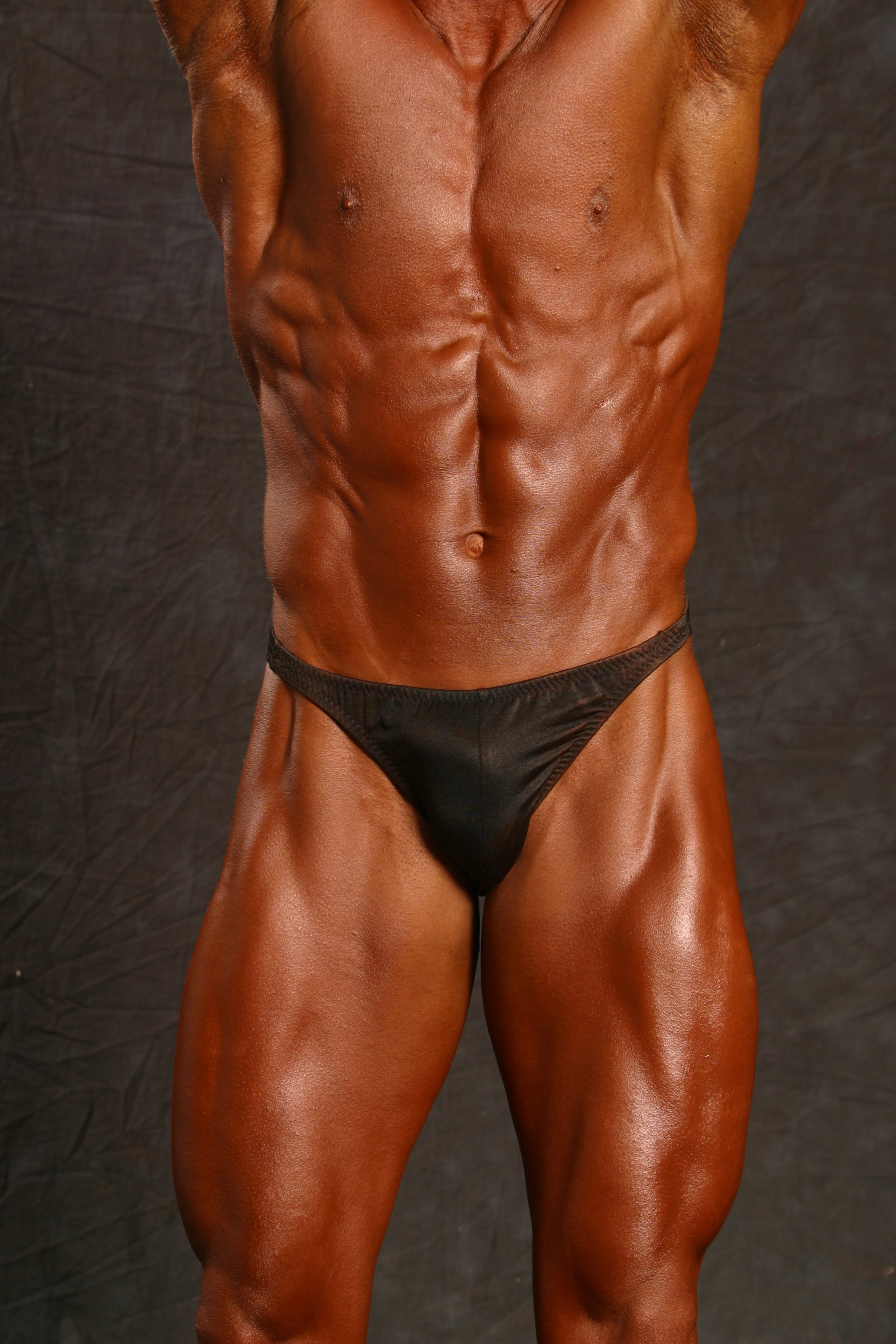 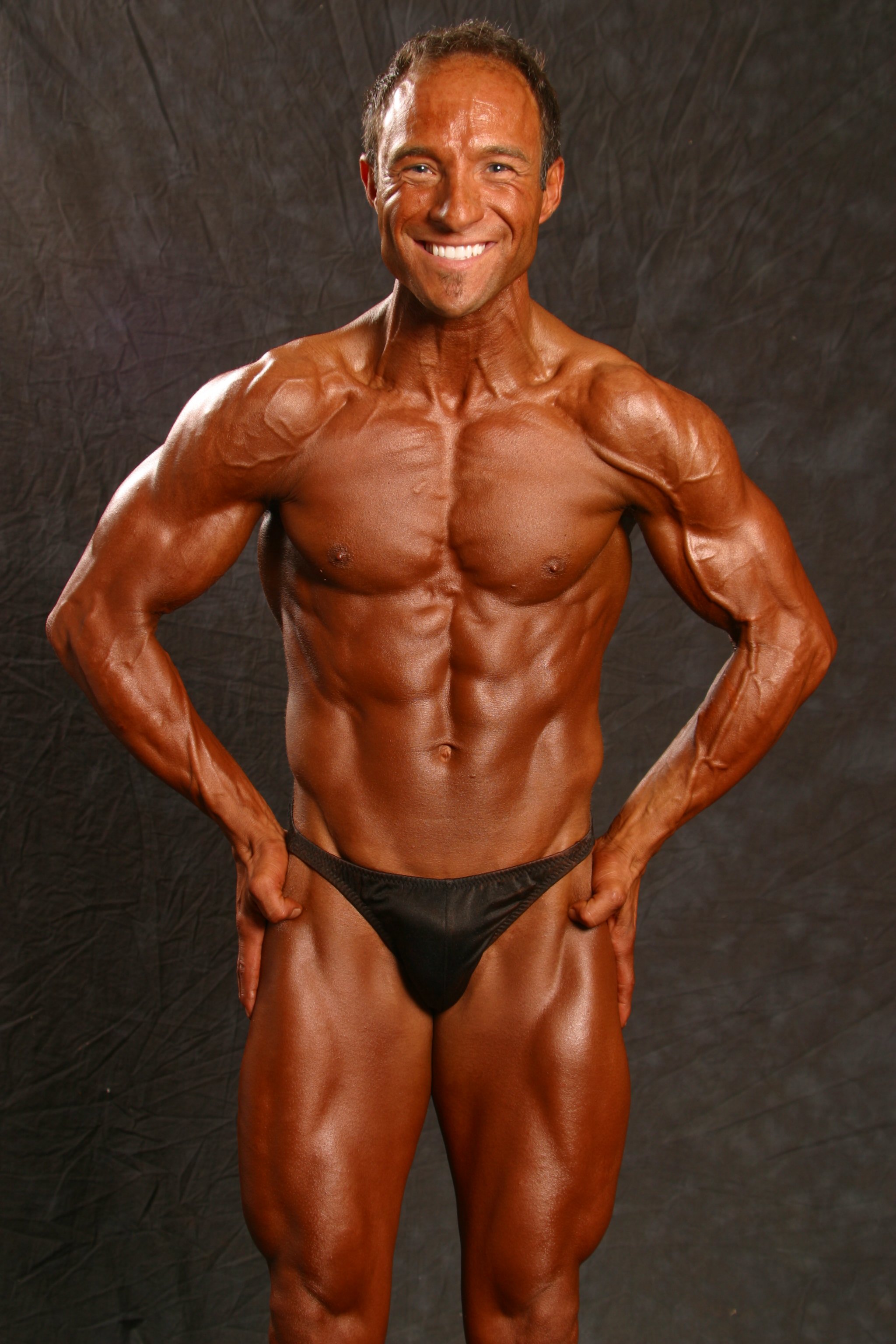 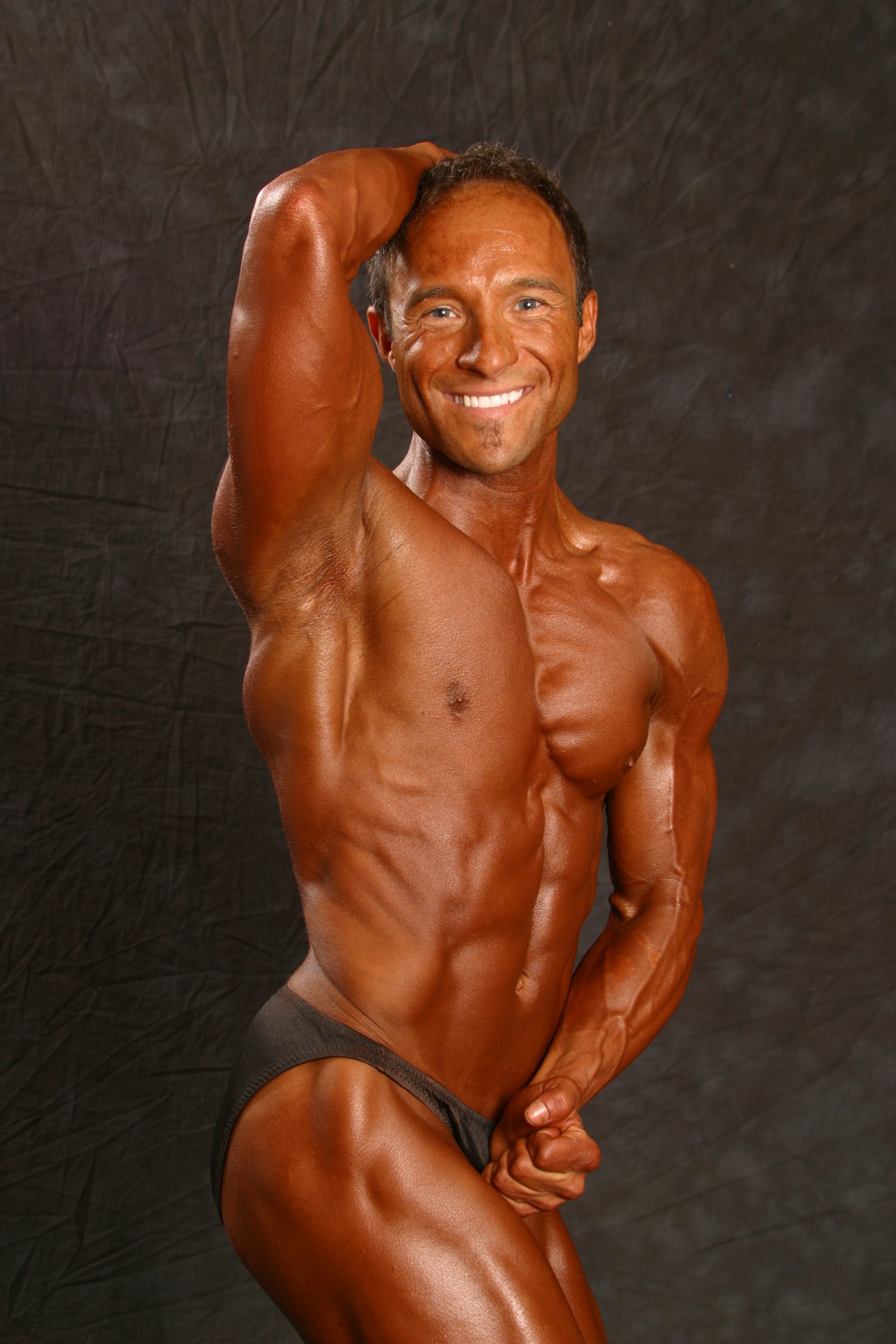 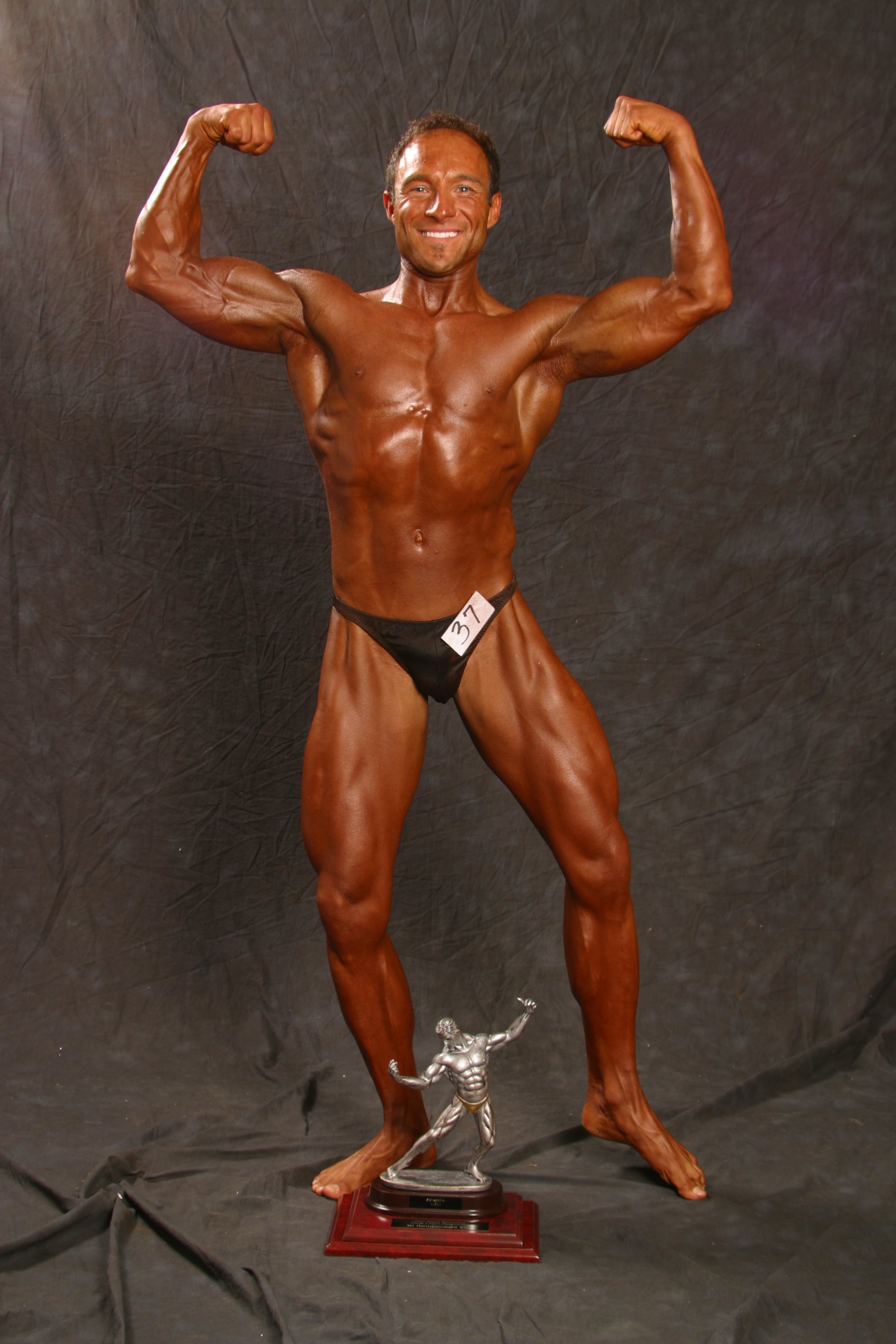 Loading the next set of gallery items...
Load More

After a six year hiatus from competing, I decided to compete at the 2013 Level 4 National Canadian Bodybuilding Competition in Halifax, Nova Scotia on July 6, 2013!

I had a lot going on in my personal life and career transition throughout 2013.  This competition was my way to get through it all!

No matter what was happening outside the gym, I remained focused on my outcome: win the 2013 Bantam Weight Canadian Bodybuilding Championship.

Fourteen weeks out from competition, I weighed 168 pounds.

Usually for competition, I have a coach help me with my training and diet plan as it is imperative to have someone with knowledge and experience take frequent looks at how my body is responding to the plan.

This time, for a variety of reasons, my coach got side tracked and so I was left alone with my previous knowledge, experience, and plan of action.  I seeked help from two other individuals throughout the dieting process, however, they didn’t know how my body responded to training and dieting and so once again, I was left on my own.

Come hell or high water, nothing was going to stop me from competing!

One week out from competition, I looked in the mirror and knew that I wasn’t in the best conditioning that I knew I could be although I had lost 24 pounds of fat.  I hadn’t booked my flight, or my hotel, or registered for the competition yet.  I sat at home and was debating the entire day whether I was going to go or not, the difference being a $2000 tab and my ego.

That night, one week out, at 8:00 pm, after a little push from a close friend of mine, I decided I was going!  I had worked way too hard not to go and the thought of having done all this work and not going, devastated me.

In the end, I took 5th place out of six competitors.  On the one hand, I wasn’t overly happy with the result, on the other hand, 5th place in Canada in my bantam weight class… not so bad! :o)

I am glad that I went in spite of all that was going on in my life at the time and I am proud to be an amateur bodybuilder who loves the dedication and commitment of doing what I do and having the competitive spirit within me. 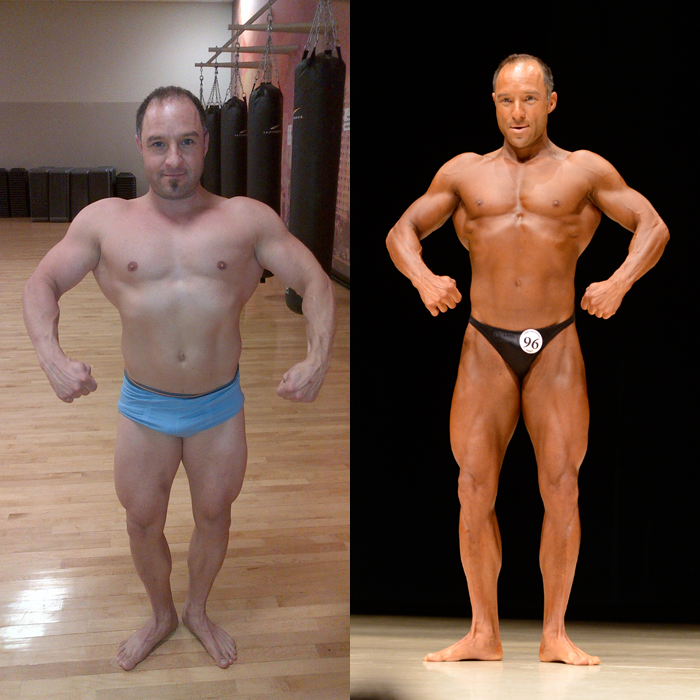 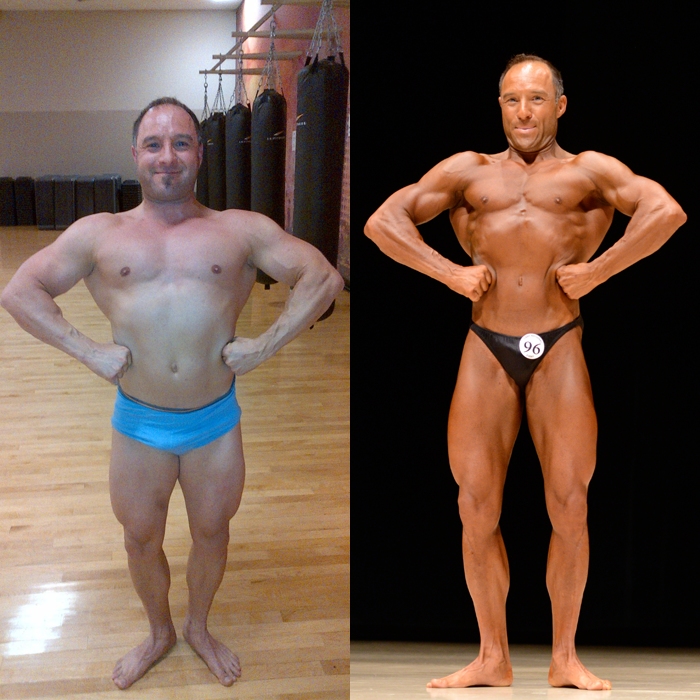 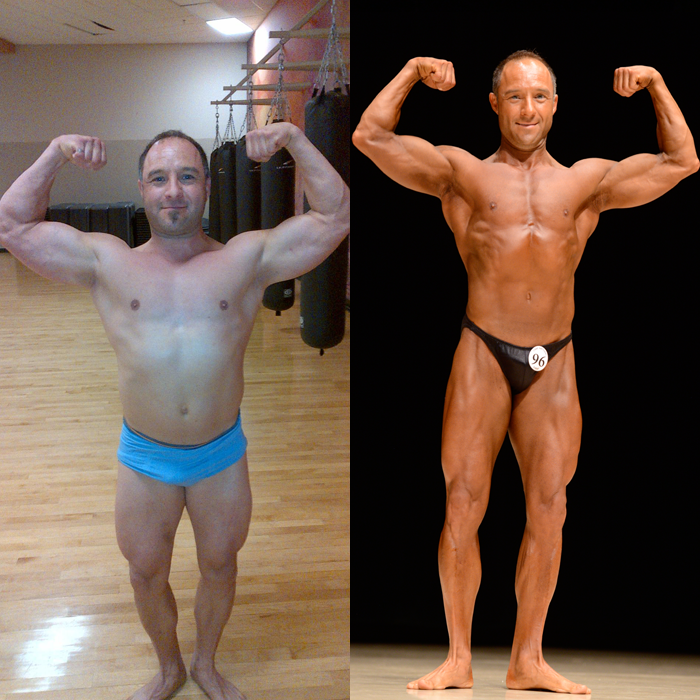 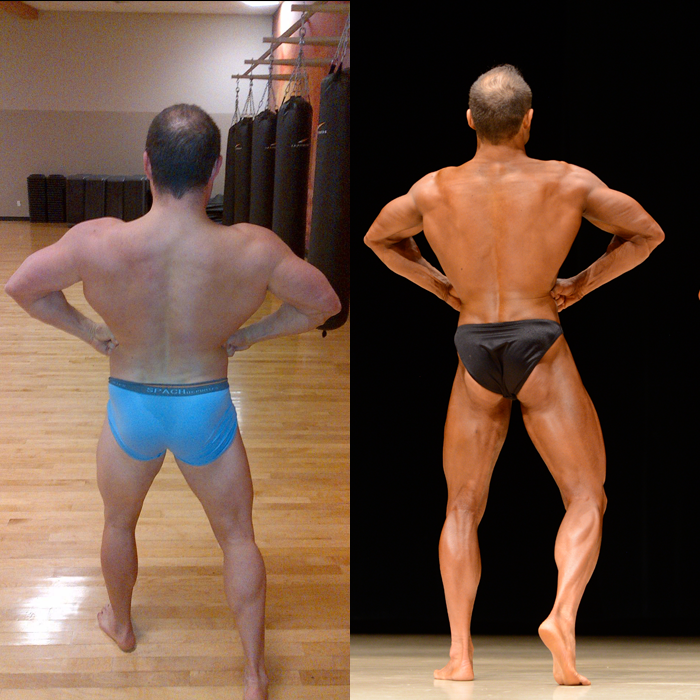 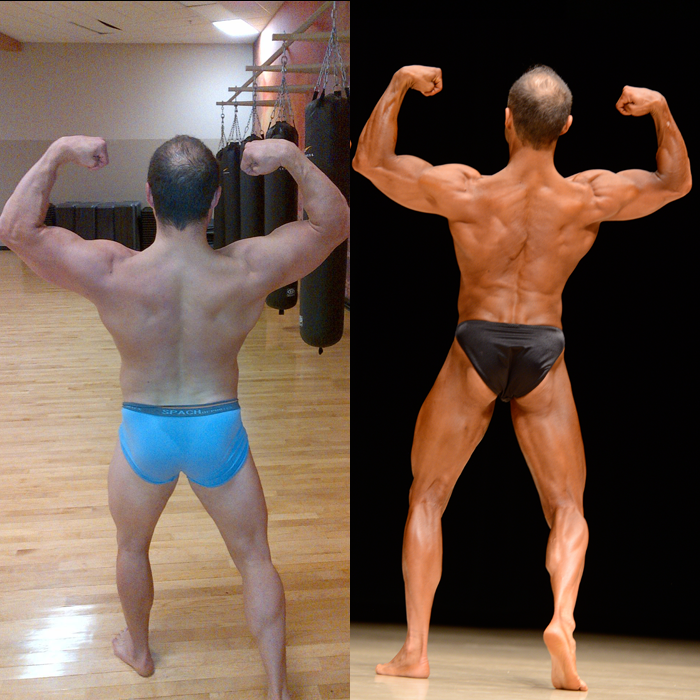 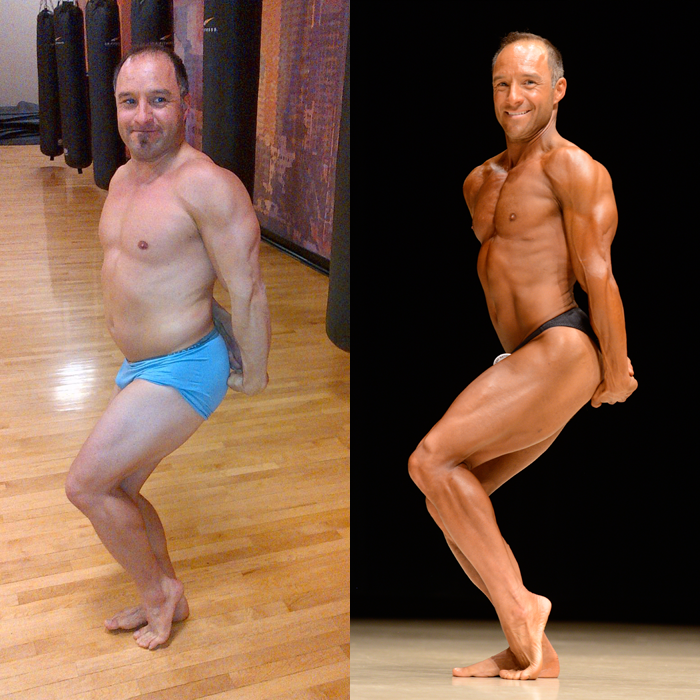 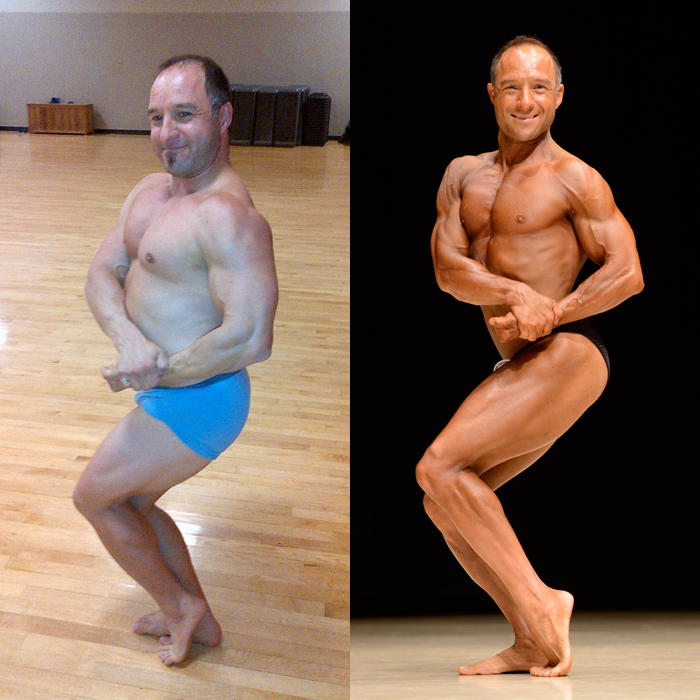 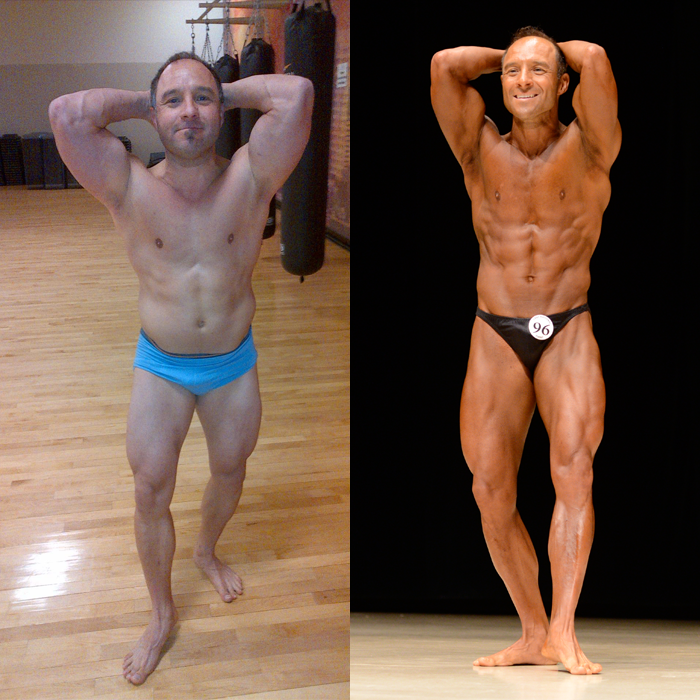 In summary, in 5 competitions, I have lost a total of over 100 pounds of fat and have learned many life lessons that I cross over and use in all areas of my life.

I tell you this not to impress you, but to impress upon you that anything is possible when we put our minds and focus into something.

I will compete again at the Canadian National level when I feel I am able to bring my best to the table and dare say “WIN” my Bantam Weight Class!

If you are interested in going through your own physical transformation (doesn’t have to be extreme like myself :o) ) with me as your coach, please click here to fill in the Contact form.  We will set up a call to discuss what it is that you would like to achieve and go from there.

I look forward to hearing from you.

I want to experience Powerful Coaching